She’s still waiting at the door with her eyes staring straight to the window. Her eyes are red, probably she hasn’t slept for days or she weeps too much. She locks her lips, no one knows what’s in her mind, but I’m sure that she’s waiting. She’s probably waiting for her long lost love to come home. Maybe she thought that love should give the loved ones a chance to explore the world, to face the battle of manhood. She thought that this was liberating love should be done, but she’s far from being free. She’s still standing at the door, waiting with her eyes staring straight to the window.

I imagine that one day, a dear friend stole her precious and naively, she’s hoping that her friend might remember the days of their friendship, come to her, apologize, and return the precious one to her. She’s probably waiting to take part in the moment of redemption, that is only likely to happen in the realm of imagination.

Is she waiting for Godot? That’s likely to happen.

Or maybe, she’s waiting for her courage to just open the door and go. She’s hoping that she might see something strong enough to be the reason she leaves. She’s looking at nothingness and she’s waiting days by days, conflicting in herself.

Ten days, I try to wander around her mind. She’s still waiting at the door with her eyes staring straight at the window, and she’s red. 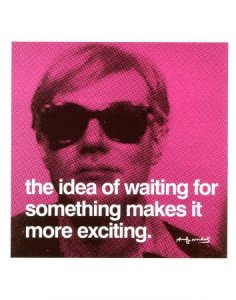