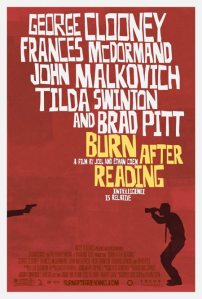 Synopsis (imdb.com)
Osbourne Cox, a Balkan expert, is fired at the CIA, so he begins a memoir. His wife wants a divorce and expects her lover, Harry, a philandering State Department marshal, to leave his wife. A diskette of Osbourne’s musings falls out of a gym bag at a Georgetown fitness center. Two employees there try to turn it into cash: Linda, who wants money for elective surgery, and Chad, an amiable goof. They try to sell the disc back to Osbourne, who has a short fuse, then they visit the Russian embassy. To sweeten the pot, they decide they need more of Osbourne’s secrets. Meanwhile, Linda’s boss likes her, and Harry’s wife leaves for a book tour. All roads lead to Osbourne’s house.

A must-see movie. 5 stars! Love love love John Malkovich and Tilda Swinton! This movie is for you if you like satire dark comedy. I can’t stop laughing. Brilliant storyline too!

Intelligence is relative, confirmed! You think you are smart in analyzing everything, not knowingly that you are damned moron. How a silly excuse (that you don’t know if that is silly) can puzzle your so-called intelligence and fuck up all of people’s lives.Suddenly the impossible is possible even though it doesn’t make sense. Desperation to comprehend this can drive you to do anything without knowing that this action might complicate things. This can happen to anybody, doesn’t matter if you are the muscle-obsessed one or even the intelligence sniper.